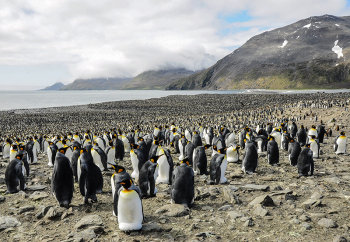 It is almost impossible to convey in words how beautiful, remote and teaming with wildlife these areas are, from the Southern Beach forests and Mountains of Terra del Fuego to the ice fields and icebergs of the Antarctic Peninsula.

'It is a vast continent, eternally white, which clings to life on the brink of death. The icy air whisks the lungs, and the eye beholds a transparent magic. The enchanting hour of calm and sunshine is swept away by furious blizzards that forgive intruders only by chance. The great southern land was buried under mountains of snow piled up and frozen during tens of millions of years; fossil remains, important chapters in the history of our planet, sleep in their immaculate shroud. All around circulates a silent carousel of giant icebergs ripped from the shore. Dwarfed lichens dot the coastal ice with their timid coloured spots. A fringe of salty ice advances and then disappears with the season, while on the soft ground the ice melts only for consolidation'.

Read the attached summary and species lists from Martin’s trip Antarctica Trip Report 2016 which included sightings of 14 Species of Whale and seven species of Albatross amongst 103 species of birds and 7 species of penguin. Beyond Terra del Fuego terrestrial plants life becomes increasingly sparse: there are no native trees on the Falklands, no shrubs on South Georgia and only two flowering plants on the Antarctic Peninsula.
Next
Previous